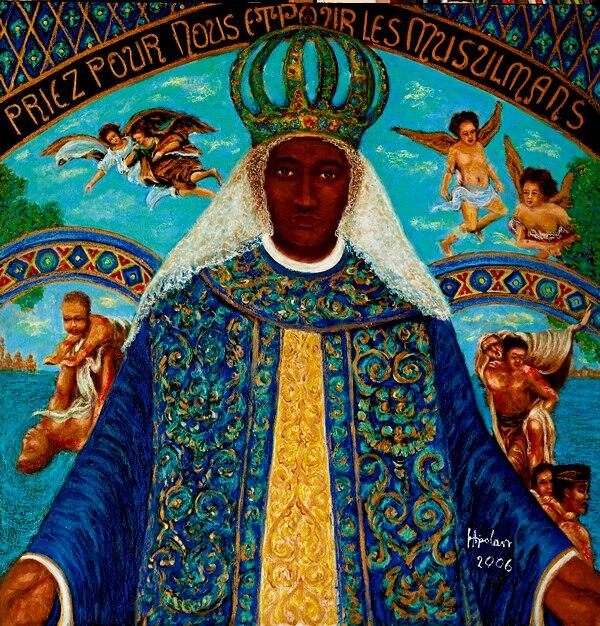 On holidays of Easter Ascension, Friday (18/4), which is only a few days later from the Election of Members of Legislative 2014, Cabinet Secretary, Dipo Alam claimed remembered one part in the course of his life, namely why he painted the Black Virgin Mary d’Afrique.

“Finished served Echelon 1 for 9 (nine) years at CMEA, I elaborated compelled to paint because of the Aceh tsunami in 2004,” said Dipo recalled the story. Some of the paintings of Aceh Tsunami he exhibited in Morocco, Tunisia, Algiers (Algeria), Czech, Slovak, Polish, Danish, etc, He added.

According to Dipo Alam as conveyed through his personal twitter account @dipoalam49 which is upload on Thursday (17/4) night, Algier is a beautiful city but the civil war for 10 years has made this city suffered many setbacks. “I remember when he took a part when Susilo Bambang Yudhoyono (SBY) resolved conflicts in various places in Indonesia,” he said.

Conflict in Algeria in 1991-2002, further Cabinet Secretary Dipo Alam, made a lot of unemployment in the city of Algiers. He watched, a lot of young kids standing in the streets without anything to do.

When exhibition of paintings paused, Dipo Alam took time to walk to Notre Dame d’Afrique, where he witnessed a church overlooking the beautiful sea. This church was founded in 1872. Dipo Alam into the church that has incredible architect’s.

“I was impressed there is a great article: Priez pour Nous et pour les Musulmans (Pray for Us and for Muslims). The message is full of peace”, said Cabinet Secretary, Dipo Alam. He also explained, The writing was written on the back of Black Virgin Mary sclupture which has elegant black-faced. It was also made him remember the conflict in Aceh at that time.

From the top of outside the Notre Dame d’Afrique yard, Dipo Alam looked at the sea bay of Algiers, he imagined the tsunami that devastated Aceh in 2004. Cabinet Secretary admitted, when he was inspired to paint the creatures of good and evil battle each other to survive before the waves of Tsunami Aceh December 26, 2004 which claimed many victims.

“I am painting, La Bataille du Bien et les Creatures Maléfiques avant à la vague de-tsunami Aceh, in 2006,” recalls Cabinet Secretary while explaining what the meaning is: “The battle between good and evil beings hold and push the tsunami in Aceh, 26-12-2004”.

Cabinet Secretary Dipo Alam grateful for both his paintings, the Black Virgin Mary and La Batallie been sold at very good rates. “My foundation can give scholarships,” he said.

Although it almost already 10 years out of civil war, according to Cabinet Secretary Dipo Alam, but until now Algeria still affected by the Arab Spring. Cabinet Secretary expressed gratitude as seen in a decade Indonesian democracy more secure and advanced.

“In a decade (2004-2014) with the permission of God and our hard work together, we can solved and prevented the past conflict. The Republic of Indonesia can be safely, grow, and move forward,” said Cabinet Secretary Dipo Alam via his personal twitter account @dipoalam49.

According to the Cabinet Secretary, currently thousands of police to carry out their duties guarding religious days. He also mentioned that we can developed economies and also could add police personnel. “Security guarantees political and economic stability,” he said.

Because of this, Cabinet Secretary, Dipo Alam invites all people to express gratitude for the election of the Legislative, 9 April 2014 and also the legislative and Presidential Election on 2004 and 2009 has running safely. Unlike in Syria, Egypt, Thailand, and others are always taken.”Hopefully, the 2014 presidential election also can be implented by safely and peacefully,” he hoped.

About the 2014 presidential election, Cabinet Secretary, Dipo Alam agrees with the Catholic leaders of Indonesia and also humanist, Franz Magnis Suseno, that the Indonesian nation does not need someone who is popular, but requires someone which provide welfare, security, and economic progress.

“I agree we dont have to run into conflict same like the past or Arab Springs,” Cabinet Secretary points out his message. That’s why he was impressed to paint the message of peace at the Notre Dame d’Afrique “Priez pour Pour Nous et Musulmans“. “Hopefully,” he concluded. (EN/ES)