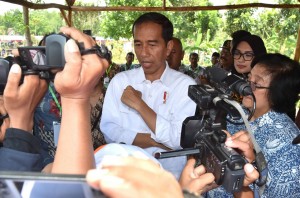 President Joko Jokowi Widodo asserted that cashless payment at toll roads by using e-money is one of the instruments for the Government in improving services for toll road users.

According to the President, with this system transaction process at tollgates can be faster and is hoped to bring more convenience for toll road users.

This cashless payment is aimed at improving our services and and speeding up services so there will be no more congestion in front of tollgates. This is what we want in the future, the President said after attending an event called Perhutanan Sosial untuk Pemerataan Ekonomi(Social Forestry for Economic Equality) held in Brani Wetan Village, Maron District, Probolinggo Regency, East Java, Thursday (2/11).

President Jokowi also said that almost all countries have now shifted to cashless payment in transactions.

Almost all countries have also done the same. We want to move forward, not backward, the President said.

Nevertheless, the President added, the Government is fully aware of the fact that a number of toll road users are not ready yet with this policy. Therefore, Ministry of Public Works and Public Housing still provides one tollgate that can serve both cash transaction and cashless transaction when toll roads began cashless payment system on 31 October this year.

President Jokowi also acknowledged that changing habit of the people from doing cash transaction into cashless transaction cannot be done instantly. Nevertheless, the President noted that in the future, the people are expected to get accustomed to it as part of the effort to support the Governments National Non-Cash Movement (GNNT).

We will have a transition period. It cannot be changed instantly. But in the future, we have to change because this is for the sake of services and speed, the President concluded. (BPMI/ES)(EP/YM/Naster)