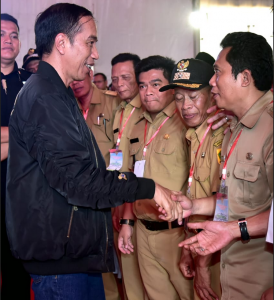 President Jokowi at an event on Village Funds in Bogor, Sunday (2/12).

President Joko Jokowi Widodo said that the benefits of the Village Funds program carried out by the Government since 2015 could not be enjoyed immediately.

The President further said that the Village Funds disbursed by the Government are not direct cash assistance so the benefits cannot be immediately felt by the beneficiaries. People may be happy, but there will be no economic impact in the future, he said.

Before the village officials who attended the event, President Jokowi told them that by developing infrastructures, the Government is actually building the foundation of the country.

The second major stage that will be started in 2019, the President added, is the development of human capital, and it cannot be enjoyed this instant as well.

As a big country, President Jokowi sees that without such development Indonesia will become a fragile nation.

Furthermore, he urged the village residents to optimally use the Village Funds that disbursed by the Government. By utilizing these funds, he expected that inequality can be narrowed. I hope that we can narrow our inequality, eliminate poverty, and also reduce unemployment as much as possible, he added.

According to the President, village development does not get enough attention for years. Therefore, the Government has disbursed Rp187 trillion in last four years.

With those funds, the President hopes that the circulation of money in the villages will also increase. It will certainly improve the welfare of village residents, he said.

For the record, over the past four years, the Village Funds have circulated in approximately 74,900 villages throughout the country and being used for constructing 158,000 kilometers village roads, 18,000 Posyandu (Integrated Health Post), 48,000 PAUD (Early Childhood Education Program) centers, 6,900 small markets, 39,000 irrigation systems and 3,000 water retention basins.

Also accompanying the President in the event were Minister of Villages, Development of Disadvantaged Regions, and Transmigration Eko Putro Sandjojo and Bogor Regent Nurhayanti. (BPMI/EN)