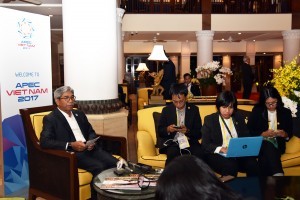 President Joko Jokowi Widodo underscored some of the principles, that is, globalization must be inclusive and the needs to take steps to ensure that communities are also prepared for the digital age. This was enunciated by Deputy Foreign Minister AM Fachir in Da Nang, Vietnam, Saturday (11/11) after accompanying President Joko “Jokowi” in a series of APEC agenda.

Associated with APEC agenda, Deputy Minister Fachir conveyed as it is understood that Indonesia as chairman in Bogor 1994 successfully initiated the Bogor Goals 2020. “Therefore, it becomes our commitment to finish the unfinished, among others, concerning the ease of doing trade and investment,” Deputy Minister Fachir explained.

In particular, Deputy Minister Fachir continued, there will be future pressures conveyed by the President, among others on the infrastructures, marine and maritime and connectivity, facilitation of expanding market access for development products that contribute to the people’s welfare, and deregulation.

“With regard to the outcome of the summit itself, the leaders agreed on a document called the Da Nang Declaration and as I mentioned earlier this document is solid enough to appreciate APEC’s current achievements,” Deputy Minister Fachir added.

At the same time, Deputy Minister Fachir went on to explain, the nature of forward looking is to keep firmly the principle called free and open regionalism. He also added that President Jokowi encouraged the achievement of Bogor Goals 2020, kept fully supporting the multilateral trading system under the WTO rules and this year featured an inclusive topic.

“In the future, the leaders also formed the APEC Vision Group to help develop a new vision after 2020 or post-2020 APEC vision. Indonesia particularly stands for the vision and some of which include in this document, among others, as a maritime country, we want the impact negative from IUU fishing to be addressed well,” Deputy Minister Fachir explained.

Likewise, he conveyed that information and the development of connectivity in remote areas, the empowerment of farmers and fishermen for food security, and no less important is the internationalization of micro, small, and medium scale enterprises (MSMEs).

“It means how the MSMEs can be supported so that it has capacity and access to international market,” Deputy Minister Fachir said.

Earlier, according to Deputy Minister Fachir, President Jokowi also met with Prime Minister of PNG, as chairman or host of the APEC meeting next year, and explicitly expressed Indonesia’s support for PNG’s Chairmanship in APEC next year.

“The support is displayed both in substance and also administrative stuff, protocol, security, and so on,” Deputy Minister Fachir concluded. (MIT/UN/EN) (MUR/YM/Naster).