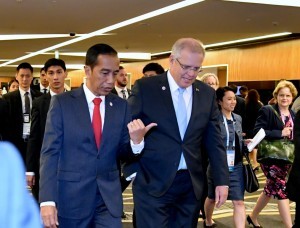 On the sidelines of the 33rd ASEAN Summit, President Joko Jokowi Widodo on Wednesday (14/11) at the Suntec Convention Centre, Singapore, held a bilateral meeting with Prime Minister of Australia Scott Morrison.

According to Indonesian Minister of Foreign Affairs Retno Marsudi, both leaders discussed in depth cooperation between the two countries that have been established a few months ago, one of which on counterterrorism. During the meeting, Indonesia and Australia discussed the progress of cooperation that has been established since August, including the convening of sub-regional meeting on counterterrorism held in Jakarta on 6 November 2018, the Minister said after the meeting.

Retno added that President Jokowi and his Australian counterpart also discussed ways to enhance interfaith dialog to encourage better relations between the two countries. In this regard, Indonesia is regarded as a model for harmony in diversity, she said.

The two leaders discussed interfaith dialog in which Indonesia is viewed as a model for pluralism, Retno added.

In the meantime, Retno said that PM Morrison also reiterated Australias support for the concept of Indo-Pacific cooperation, which gives priority to ASEAN centrality. Indonesia conveys appreciation for Australias support for the development of the concept of Indo-Pacific cooperation that prioritizes centrality of ASEAN, Retno concluded.  (BPMI Setpres/ES)