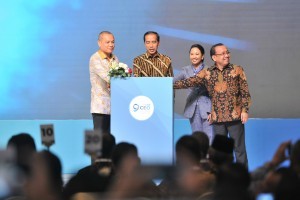 In an attempt to de-escalate the ongoing trade war between the United States and China, Indonesia has tried to mediate the dispute between the two economic giants, but to no avail, President Joko Jokowi Widodo said during the 2018 Kompas 100 CEO Forum in Jakarta, Tuesday (27/11).

According to the President, the United States and China thanked Indonesia for making the effort to mediate the two countries.

With the failure to reconcile the two countries, the trade war will continue and will contribute to the global economic uncertainty, the President said.

President Jokowi went on to say that Indonesias attempt to mediate the United States and China was made at the ASEAN Summit and the APEC Summit and that Indonesia will make another attempt at the G20 meeting. He also reminded the CEOs to remain optimistic amidst the global uncertainty because there is always an opportunity in every difficulty.

The President further said that he received some reports saying that some investors in the United States and China want to relocate their factories to ASEAN countries, including Indonesia, to avoid the increased import duty. Another opportunity, according to the President, is the new export market in China and the United States.

“(The trade war) provides opportunities to strengthen our industries and increase our exports. It depends on all of us whether to grab the opportunities or not, the President said, adding that he encourages the CEOs to explore new opportunities and that the Government will provide the necessary supports.