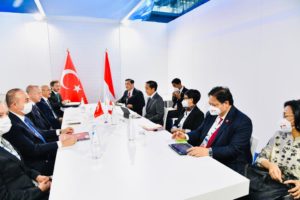 President Joko “Jokowi” Widodo on Saturday (30/10) held a bilateral meeting with Turkish President Recep Tayyip Erdoğan on the side event at the G20 Summit.

The two Presidents discussed a number of things, including the plan for President Erdoğan’s visit to Indonesia.

The two leaders also assigned their Foreign Affairs Ministers to make preparation for the visit, including the launch of a high-level strategic mechanism.

In addition, on the establishment of Indonesia-Turkey Comprehensive Economic Partnership Agreement (IT-CEPA) plan, President Jokowi expressed belief that the agreement will further strengthen economic cooperation between the two countries.

“I suggest that we assign the respective Ministers of Trade to conduct the negotiations immediately. Of course, it would be very good if IT-CEPA became one of the deliverables from Mr. President’s visit next year,” President Jokowi said.