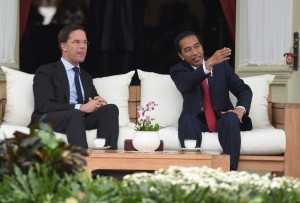 Arrived at the Palace at around 11.00 a.m., the Prime Minister was welcomed by the President himself. After signing the state guest book, the President took Mark Rutte to the back terrace of the Merdeka Palace and had a tête-à-tête meeting.

Atferwards, President Jokowi and the Prime Minister led their government delegations in a bilateral meeting, held at the Merdeka Palace.

Prime Minister Mark Rutte, welcome again to Indonesia. This is our second meeting. We first met three years ago when I was the Governor of Jakarta, the President said starting his remarks in the bilateral meeting.

President Jokowi expressed his happiness over the visit of the Dutch Prime Minister who was accompanied by three ministers as well as 200 businesspeople. It shows trust. A trust to Indonesia in investment sector, the President said.

The large delegation, according to the President, shows the Netherlands high commitment to keep enhancing the relations with Indonesia.