Indonesia, Japan to Cooperate in Fight Against Terrorism, Maritime Affairs 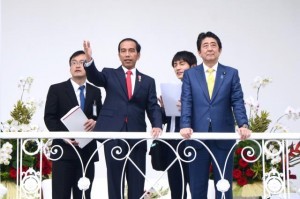 Japanese Prime Minister Shinzo Abe said amidst the spread of terrorism in Asia, Japan and Indonesia, which is the largest Muslim country in the world, have agreed to fight terrorism in order to create a society in which the young generations can have hopes.

In addition, we have also agreed to intensify cooperation in the security and defense sectors and to make the most opportunities like ministerial meetings 2+2 (two plus two), Prime Minister Abe said in a joint press statement with President Joko Jokowi Widodo after a bilateral meeting at Bogor Presidential Palace in Bogor, West Java, Sunday (15/1).

Prime Minister Abe added that considering that both countries are maritime countries, cooperation in the maritime sector is the main priority.

He added that Japan will actively push for cooperation in the maritime security sector and the development in outermost islands in Indonesia through an Indonesia-Japan maritime forum established in December last year.

In the meantime, in order to contribute for regional development in Indonesia, Prime Minister Abe said Japan has decided to create business opportunities worth a total of 74 billion Yen for irrigation and coastal conservation.

Regarding the South China Sea issue, Prime Minister Abe said the issue has become a concern for the international community that will directly affect peace and stability in the region. We would like to reiterate the importance of the principle of upholding rule of law and the resolve of conflicts in a peaceful manner, the Prime Minister said. (DND/ES) (EP/YM/Naster)