Ponorogo Dam Construction to be Completed This Year: President Jokowi 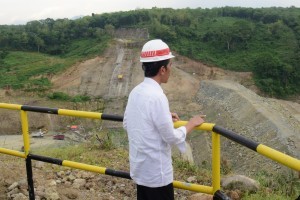 The construction progress of the dam has reached 77 percent and is expected to be finished by the end of this year.

The dam has the capacity to hold 43 million cubic meters of water and will be able to irrigate approximately 7,700 hectares of rice fields. Besides this dam, there are several others dams currently are being built by the Government, namely Tukul Reservoirs, Tugu Reservoirs and Bagong Reservoirs all in East Java province.

President Jokowi expressed hope that the dam will help farmers increase their rice yields as they will have more water reserves.

Commenting on the construction of dams in a bid to achieve food self-sufficiency in the country, President Jokowi said that it is indeed a long-term process (to reach food self-sufficiency); thus, the Government needs to build more reservoirs first. (RSF / OJI / UN / RAH / ES)