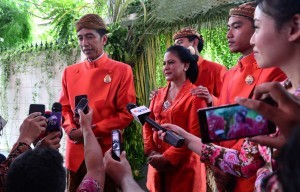 President Jokowi accompanied by First Lady Ibu Iriana and his sons responds to reporters questions at the Presidents private residence in Solo, Central Java, on Tuesday (7/11)

President Joko Jokowi Widodo asked for the blessings from the people for the marriage of his daughter, Kahiyang Ayu, with Muhammad Bobby Afif Nasution scheduled to be held on Wednesday (8/11) in Solo, Central Java.

We pray and ask for your blessings so that Kahiyang Ayu and Muhammad Bobby Afif Nasution can build a family that is saqinah, mawaddah, wa-rahmah (a harmonious, peaceful and affectionate family), President Jokowi said after taking part in a number of Javanese traditional ceremonies on the day before the wedding at the Presidents private residence in Solo, Central Java, on Tuesday (7/11).

During the ceremonies, the President put on bleketepe (weaves of coconut leaves), followed by siraman (bathing ceremony), and sungkeman (whereas the bride and the groom will ask for forgiveness and permission from their parents for marrying their chosen one). The President also said he was grateful that the series of ceremonies run smoothly from start to finish. The siraman is completed.Alhamdulillah, the ceremonies ran smoothly from start to finish, the President said.

The President also said that the siraman has a philosophical meaning in which it can clean the heart and thoughts of the bride and groom from any negativity.

After the siraman, President Jokowi directly headed to Sragen Regency to conduct a working visit. There will be land certificates distribution in Sragen that has been scheduled, President Jokowi further said.

The ceremony before Kahiyang and Bobbys wedding will be followed by midodareni (ceremony on the eve before the wedding) later in the evening, while marriage covenant and wedding reception will be held on Wednesday (8/11).  (BPMI Setpres/ES) (RAS/EP/YM/Naster)