President Jokowi in Yogyakarta to Monitor Village Funds Use 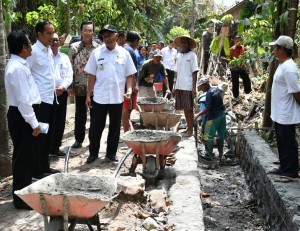 During his working visits to Yogyakarta Province, President Joko Jokowi Widodo on Wednesday (29/8) visited Sendangtirto Village, Sleman Regency to oversee the use of village funds.

During the visit, President Jokowi, who was accompanied by Yogyakarta Governor Sultan Hamengku Buwono X, inspected the construction of an irrigation channel from the 350-meter-long Klontongan Dam to irrigate farmers’ fields. The construction of the dam uses village funds in the 2018 budget year amounting to Rp192,414,000.

I think the construction of irrigation here is very good. It is done by the people themselves, the President said.

On that occasion, President Jokowi ordered related officials to extend the irrigation channel to support the locals and also expressed hope that the infrastructure development will be completed soon so that the Government can move to the next stage.

We will intensify village economic development if the infrastructures, in the form of roads, irrigation, retention basins, and whatever is needed, are completed because it is important to boost productivity in the village, the President said.

For the record, in addition to the construction of irrigation channels, there are several completed projects in the village that are fully-funded by village funds.