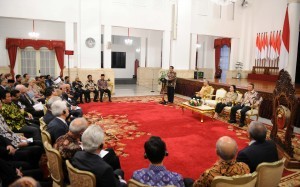 President Joko Widodo said that Indonesia is a nation/country comprising of hundreds of tribes, various religions. It is a diverse country. However, Indonesia, despite its diversity, manages to unite as a nation.

According to the President, there are two things that become the platform for Indonesia to unite as a nation. First, Indonesia has Pancasila. This is the ideology of the nation, the way of thinking and behaving, a guideline for Indonesias way of life and for moving forward. Second, one thing that as important as Pancasila, is Bhinneka Tunggal Ika. This is an old saying in Indonesia which means unity in diversity.

These are the values that we uphold, the President said when delivering a remarks at the opening of the 6th World Peace Forum (WPF) at the State Palace, Jakarta, on Tuesday (1/11) evening.

The President said there are indeed several groups that had intention to disrupt Indonesias unity withacts of terror, such as Bali bombings in 2002 as well as bomb attack in Thamrin, Jakarta, at the beginning of 2016. However, the President firmly said, with the spirit of unity and togetherness, Indonesia is successful to overcome these acts of terror.

The President thought that those actions, as the cause of similar terrorism acts in other countries, are the results of violent extremism.

Based on experiences, the President told the WPFs participants, the main cause of violent extremism is global injustice. Therefore, to address this global issue, it needs a collective actions to fight against it.

The President believes that the 6th WPF will be able to present a productive dialogue and strengthen collective efforts in promoting peace in all countries, particularly the world peace.

Here we have religious figures, policy makers, experts, politicians, and activists from all over the world. All of you are the defenders of peace. You are our lights of moral. We owe you because you work selflessly to promote and fight for the worlds peace, the President said.

The President expected the hard work of the WPF in promoting peace can inspire a lot of people. To fight for peace, to fight against intolerance as well as violent provocation. We could say we are not afraid of threats and acts of terror.

Not Only Religious Figures

The theme is important and reflects the worlds current situation. We, now, is facing threats of civilization as well as extraordinary humanitarian crime, for example, violent extremism in the name of religion as well as political interests, and ethnocentrism, Dien said.

The former General Chairman of PP Muhammadiyah asserted that it needs to involve other parties, not only religious figures, to achieve peace. It includes the Government, the Country, business world, intellectuals, as well as the media. This is the position of WPF, he further said.

WPF is a two-year activity that since 2006 was hold by PP Muhammadiyah collaborating with Cheng Ho Multi-Culture Education Trust in Kuala Lumpur, Malaysia, as well as Center for Dialogue and Cooperation among Civilisations (CDCC).

The 6th WPF was attended by 200 participants from 52 countries, comprising of figures from various religions, intellectual political figures, business people, and peace activists.