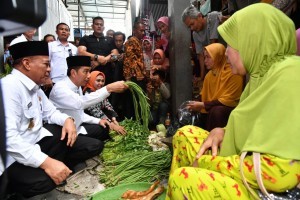 “The most important thing when visiting the market is checking prices. When I went to Bogor market, the price of chili was still over Rp30,000, today, in this market,  it is Rp17,000” the President said.

In the relatively crowded market, President Jokowi asked the sellers the prices of staple foods such as peanut, rice, and chili. The President also bought some food including chili, peanut, rice, crackers, sapodilla, and beef tripe.

President Jokowi further said that the Government always strives to maintain the balance of commodity prices to accommodate the interests of farmers and consumers.

When the President was walking through the market area, many people in the market wanted to shake his hand and take selfie with him.

During the visit, Ibu Iriana also bought several items in a number of kiosks, including dozens of salted eggs.

The visit to the market is not previously listed in the agenda of the President’s activities during his working visit to East Java. (BPMI/EN)