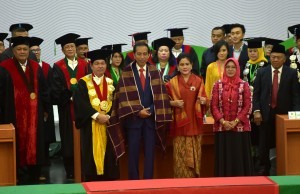 “It shows that we have a lot of things to do, President Jokowi said in his general lecture at the 66th Anniversary of the University of North Sumatra (USU), Medan, Monday (8/10).

President Jokowi further stressed that entrepreneurship is not solely for profit making for the company, but also for bringing benefits for the communities. Entrepreneurship, the President added, will create sociopreneurs who are expected to solve social problems through entrepreneurial methods.

The President further said that higher education must indeed produce graduates who master technology and science. However, the President added, universities should also make their alumni love the country, uphold the principles of Pancasila (state ideology), and support social justice for all Indonesians though integrity and professionalism.