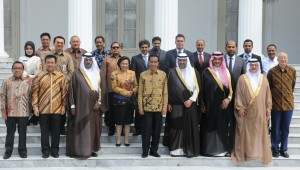 President Joko Widodo (Jokowi) at the State Palace, Jakarta, Wednesday (7/1), received a delegation of the Olympic Council of Asia (OCA), led by the President of OCA, Sheikh Sabah al-Ahmad al Fahal. The meeting is to discuss the plan of holding sporting event of the 18th Asian Games in 2018, which is planned to be held in Jakarta and Palembang, South Sumatra.

Governor of Jakarta Basuki Tjahaja Purnama (Ahok) and Governor of South Sumatra Alex Noerdion who accompanied President Jokowi at the meeting expressed their determination for compact each other to support the implementation of this event well.

According to Ahok, Government of Province of Jakarta will also build the transportation from Tangerang enter Pluit Reservoir, Old Town, Ancol, Kemayoran, Sunter, Kelapa Gading to Bekasi, West to East in coastal area. While the stadium that will be a mainstay in the Asian Games in Jakarta is Gelora Bung Karno Stadium.

As we know, Indonesia was appointed to be the host of the Asian Games in 2018 at the 17th Asian Games in Incheon, South Korea (ROK), in October 2014 ago.