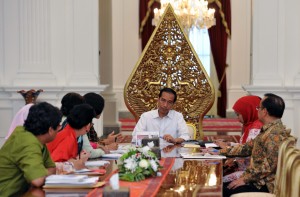 President Joko Widodo talks with National Commission on Violence Against Women delegates on Wednesday (8/6), at the Merdeka Palace

The National Commission on Violence Against Women stresses the importance to put protection on sexual violence victims on the bill on Sexual Violence Elimination contained in the National Legislation Program (Prolegnas).

The statement was made during a meeting between Chairperson of the National Commission on Violence Against Women Azriana and some of its officials with President Joko Jokowi Widodo on Wednesday (8/6), at the Merdeka Palace.

We told the President that the final bill is currently being finalized and is expected to be proposed by the Commission and an institution for victim companion Procurement Services Forum to the House of Representatives (DPR) in July. We will disseminate the bill to the people in regions, Azriana told the reporters after the meeting.

The Commission has found 15 forms of sexual violence experienced by Indonesian women including children, yet the prevailing regulations is very limited, Azriana said.

The bill will be focussed on protection of the victims and toughen penalty for the perpetrators. Besides imposing punishment, several preventive measures involving many sides also become our efforts to ensure sexual violence will not happen again, Azriana stated.

The perpetrators can be sentenced with principal penalties, including imprisonment, rehabilitation, and restitution, as well as can be sentenced with additional punishment, including restriction of movement, social working, confiscation of property, and by informing the judge’s verdict to the public that aims to prevent sexual violence cases, not to humiliate the perpetrators, Azriana explained.

The Commission provides special chapter in the bill regulating the recovery of victims that are not covered by other prevailing laws.

Once the bill is passed, the Government will have a program that ensures the recovery of victims runs well. Meanwhile, the restitution which is included in the principal penalties aims to make it able to be decided by the courts, so we can be sure of the execution, Azriana added.

Meanwhile, Minister for Women Empowerment and Child Protection Yohana Yembise stated the meeting between the President and the Commission discussed the bill on Sexual Violence Elimination that has been submitted to the 2016 National Legislation Program. From those six bills, this bill was indeed a priority following rising cases of violence against women recently, which should draw the focus of the House of Representatives.

The Minister also discussed the on-field mechanism, ranging from the handling of victims to the rehabilitation process to the President.

Regarding the restitution, my ministry has already prepared the substance and we will discuss it further with related ministries, Yohana continued.

In the meantime, Minister of Social Affairs Khofifah Indar Parawansa affirmed that her ministry is currently focusing on the concept of rehabilitating the victims, victims families, and perpetrators.

“There are six bills that have been submitted to the 2016 National Legislation Program, one of them being the Elimination of Sexual Violence bill. This will become a priority for the Government and the DPR to accelerate the deliberation of those bills,” Khofifah said.

We have several laws, including the Laws on Human Trafficking, Domestic Violence Eradication, and Child Protection, yet there are several other things that are not covered by those laws, Khofifah further said.

Minister of Social Affairs Khofifah Indar Parawansa, Minister for Women Empowerment and Child Protection Yohana Yembise, and Minister of State Secretary Pratikno accompanied the President in the meeting with the delegates of National Commission on Violence Against Women. (DND/ES)(RAS/EP/YM/Naster)