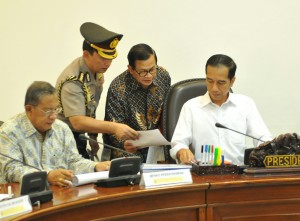 Connectivity is meant to connect regions so it can boost the economy, lower logistic costs, and lower transportation costs so Indonesias competitiveness can be higher, President Jokowi said.

If, for example in Jakarta we can integrate airplanes, trains, LRT (Light Rail Train), MRT (Mass Rapid Transport), buses, and seaports, it will be very good. But I think it has been included in the planning. I assure that it has been included, President Jokowi said in his introductory remarks at a limited cabinet meeting at the Presidential Office on Wednesday (8/6).

Meanwhile, regarding modernization of transportation infrastructures and facilities, President Jokowi said that Indonesia must build airports, seaports, and stations that are more modern and with the capacity wanted by the people who use them.

We must, for example, modernize terminals, docks, etc. Runway at our airports must also be widened and extended. Modernization must also encompass all modes of transportation, be it trains, buses, or ships  all for the sake of the passengers convenience and safety, President Jokowi said.

In the meantime, at the beginning of his introductory remarks, President Jokowi said that this is the sixth meeting that discusses the LRT projects in Palembang, Bandung, and Greater Jakarta.

We have often had meetings discussing this issue. This is not right. However, since there are a number of things that have to be decided, its alright. I hope this is the last meeting (discussing the issue) though, President Jokowi said.